Last weekend the team went on the road so to speak for a one-day bon spiel at Welland, Ontario. Three of us went via Cleveland and one went the other way around (via Detroit). It took both cars about 3 1/2 hours to get to our destination.
Welland is a town not too far from Niagara Falls. The border crossing took only a few minutes. Any time you tell a Canadian border guard that the purpose of your visit is curling, they LOVE it!! Obviously, it's not a common occurence.

We had two 8-end games on Saturday. We played pretty well but lost our first game with the last rock. I missed a guard and the other skip was able to take out our shot rock for the win. The second game we faired better and won. 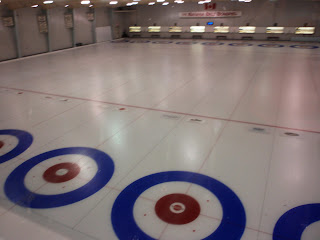 The ice was good practice for us. Very fast and it had quite a bit of curl to it. Our second game, however, had a bit of funky ice. One side of the sheet curled like crazy and the other side fell out. I guess that's part of the challenge!! We were the only US team at the event so that was pretty cool. The Canadians were happy to have an international flavor to the event and were great hosts. Definitely a bon spiel to return to.

The team is continuing to practice and gel. We're still meeting for Monday practices and have one more spiel to test ourselves in February. Only a little over a month until Nationals.
Posted by Debra Horn at 5:38 PM No comments:

Wow, I can't believe it's already 2010! I have been very remiss in posting what's been going with my running and curling. Most of my "free" time has been devoted to curling. Considering a game takes two-plus hours, curling can eat up a lot of time. For example, this past week, I played one game on Monday, Tuesday and Sunday and played two games on Thursday, Friday and Saturday! Only one day (Wednesday) to do my laundry!!

My curling team has been trying to get focused on the US Nationals. Nationals are coming up fast. Besides practicing with Mayfield teams, we have a few Canadian bon spiels lined up for January and February to test out some really fast ice. Of course, we also have to figure out uniforms. If we're not the best team at Nationals, we aim to be best dressed! Time will tell.....

On the running front, I have been doing very minimal miles. I've still be plagued by a swollen tendon in my ankle that doesn't seem to want to go away. Combined with the huge snow banks, I've been limiting my running to the treadmill. I will need to start increasing my miles shortly so I'm hoping both the swelling and snow banks disappear soon!

The US 24-hour team for France should be announced shortly. Based on results from 24-hour races this past year, I think we will have superb women's and men's teams. I can't wait to see how the race unfolds in France - only 4 months away! Other than the World race, I haven't planned anything else except the North Coast 24-hour in September. Given the curling practices (and work), my time seems taken up until mid-March. We will just have to see what develops. Stay tuned.
Posted by Debra Horn at 4:48 PM 1 comment: