As I was searching for a training run in April, I stumbled across a new one - the Earth Day Challenge marathon in Gambier, Ohio.  I quickly signed up for it as it fit perfectly into my running schedule.

The marathon was held on April 25th.  The course was advertised as flat.  The first 4 miles, however, wound around the town of Gambier and was a series of rolling hills.  After we got that out of the way, we headed out onto the Kokosing Gap Bike Trail, a well-maintained paved path - which was very flat.

It was held in conjunction with a half-marathon so there were a fair amount of people for the first half of the race.  The second half was a bit lonely as I think there were about 120 total marathoners in the race.  All of the aid station workers and road crossing volunteers were very friendly so I did have some company.  The drink choice was Heed and Hammer Gels were passed out too.  Perfect!!

Weather conditions at the start were ideal but things heated up a bit for the second-half.  There was some tree cover on the path but the sun poked through a bit and I got my first sun-burn of the season.  Right after the race, the sky opened up and poured.  Sadly, I think a lot of the runners got caught in it.

This was a very nice, low-key race.  Very well run.  And in keeping with the earth day theme, all of the goodie bags had compact fluorescent light bulbs - something I can actually use.  I will definitely keep this race in mind for next year.

So have I missed any other Ohio marathons?
Posted by Debra Horn at 4:18 PM 4 comments:

Last week the ultrarunning community got some very exciting news.  The AAU Sullivan Committee announced that my 24-hour teammate, Amy Palmiero-Winters, was the recipient of the 2009 James E. Sullivan Award "for her outstanding athletic abilities and accomplishments in her sport as well as sportsmanship, leadership and character (on & off the field) in her lifestyle as a whole."  I am certain that this is the first time an ultrarunner has received the Sullivan award.

This is a huge honor.  Amy joins such other past recipients as Frank Shorter, Carol Lewis, Florence Joyner and Joan Bennoit- Samuelson.  Amy's story is truly inspiring.  Looking forward to finally meeting her in France. 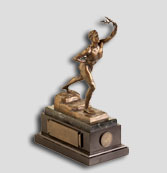 It is very encouraging to see the 24-Hour Race has increased participation each year from when I started four years ago.  Last year, 28 countries participated and 14 women's teams competed (a team must include at least 3 runners from a country).
This year, runners from a total of 30 countries are set to participate in France on May 13th.  Additionally, we now have increased the number of women's teams - 16 total!  The women's teams are: Australia, Austria, Canada, Czech Republic, Estonia, France, Germany, Hungary, Italy, Japan, Latvia, Russia, Spain, Sweden, United Kingdom and United States.
While the French women are the heavy favorites (they took the Number 1 and 2 spots last year and the Gold Team medal), I have confidence in my teammates that the French will get a run for their money.  It should be exciting to watch!
Posted by Debra Horn at 11:13 AM 1 comment: