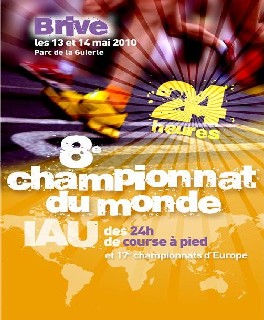 Ok, maybe not Paris, but the 2010 World 24-Hour Championship will be held this Spring in Brive, France.  The race is on May 13-14, a Thursday (Ascension Thursday - National Holiday) and Friday.  Brive is about 4 hours by train southwest of Paris.
We have recently received some information about the course.  Much of the route goes through a city park.  The course is approximately 1200 meters and will be run in a clockwise direction.  About 1/3rd of the course is a fine crushed gravel, a short portion is a dirt path with the remaining part on asphalt. There is one small hill with about a one meter rise and around 100 meters in length followed by a descent of the same amount. There is also a number of both left and right hand turns within the loop.  Looks like the French will do a fabulous job and I am very excited to run the event.
This year, both the women's and men's US teams are very strong.  On the women's team, we have Jamie Donaldson (4th overall last year), Jill Perry (US National 24-hour champ); Suzanna Bon, Anna Piskorska, Amy Palmiero-Winters and me.  On the men's team, there is Phil McCarthy (US National 24-hour champ), John Geesler; Dan Rose, Serge Arbona, Scott Jurek and Michael Henze.
We are hoping to bring home some medals.  Let's keep our fingers' crossed!
Posted by Debra Horn at 4:29 PM 2 comments: 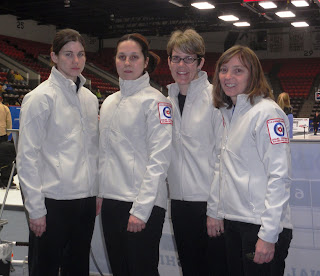 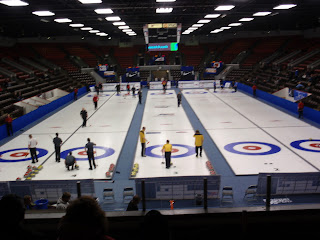 A view from the Stadium stands.
We went in to the competition with low expectations. We were seeded 9th out of 10 teams. We had only been curling for a few years. Most of the teams (even the one Juniors team that played) had curled many more years than us, had tons more experience and even had coaches.
Contrasted to the ice we usually play on, the ice at Kalamazoo was meticulously maintained by the ever-vigilant ice crew. It was about 25 second ice and, while it started out straighter for the first few games, it developed a good 4-plus feet of curl as the week went on. It was a real treat to play on it. Now, if we could have only made all of our shots!
We ended up winning our games against the 6th, 7th and 8th seeded teams for a ending record of 3-6. Overall we finished in 7th place. While we all felt we could have played better and won more games, we were very happy with the result as it was much better than was predicted.
All of the teams were very friendly and supportive. While the level of talent varied, I think we all recognized that we need to keep improving the quality of play at the women's competitive level. We all benefited by participating and hopefully can build on the experience to step up the level of play a notch in years to come.
Thanks again to Drymax socks. They make some amazing hockey socks that worked very well for curling. The socks were warm but not bulky. Also thanks to SniperSkinz. We definitely had the best looking brooms! 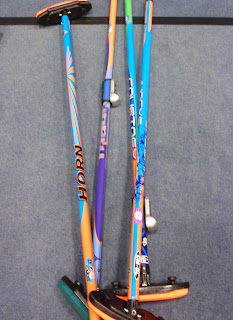 Thanks to Sponsors Drymax and Sniperskinz

Only a few more days until U.S. Nationals in Kalamazoo. Our team has been extremely fortunate to have in our corner two sponsors. Drymax, who has also sponsored my ultrarunning, has stepped up to outfit our team with socks. We will be trying out their new line of hockey socks. When I first heard that Drymax just started making hockey socks, I though it would be a perfect fit to try them out on the curling ice. Drymax agreed and we now are well stocked. Our feet should be very happy during our upcoming games.

Another company geared to hockey, Sniperskinz, has also agreed to sponsor the team. Sniperskinz makes some very cool wraps for hockey sticks. They have never made wraps for curling brooms and had to make some adjustments in the sizing to fit the brooms versus a hockey stick. Our team is the first to try out the wraps on curling brooms. We got to customize the wraps with an individual design and colors. It only took minutes to apply the wraps and our brooms look very sharp now. We will definitely have most unique brooms at Nationals.
Posted by Debra Horn at 3:15 PM No comments: