Okay, now that I got your attention, yes there is a way you can get a free high-quality technical t-shirt and feel good about yourself in the process.
I am involved in a fundraiser for the Epilepsy Association called the Virtual Runner. I signed on to help with this event because of the little girl in the photo below: 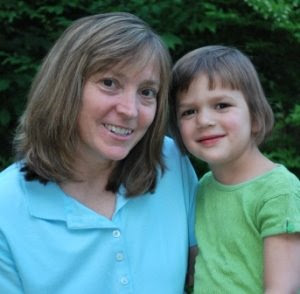 Lucy, my friend and running partner’s daughter, was diagnosed with epilepsy when she was two-years-old. Lucy and her family struggled for over a year, with Lucy averaging 70 seizures in a single day. Today, through a combination of medication and diet, Lucy has been seizure-free for the last year.

After experiencing epilepsy first-hand, my friend and I are helping kick off a new running event called the “Virtual Runner.” All monies raised go to the Epilepsy Association to provide needed services to affected individuals and their families.

Anyone reading this Blog can sign up online NOW as a Virtual Runner. Then, beginning August 1st through November 8th, Virtual Runners log their race miles online. Races can be any distance and can be run anywhere in the world. At the end of the period, prizes will be awarded to the Virtual Runner with the highest mileage logged and with the highest dollar amount raised.

This is a very easy thing to do with minimal effort. So, don't delay! Sign up online now, solicit donations, and start racing to help the Epilepsy Association turn your miles into money. To sign up as a Virtual Runner or for more information, click on http://www.epilepsyinfo.org/VirtualRunner.htm

Posted by Debra Horn at 3:47 PM No comments:

After the torrential rain on Friday night, the weather shaped up and Sunday was very nice for Father's Day. I signed up this year to run a 5-mile Dad's Day run that is held at a local school one block from my house. I had toyed with the idea of running the Mohican 100 but was glad I didn't given the amount of rain we got just before the start of the Mohican race. Of course, for people who like to run in mud (not me), the Mohican trail course would have been ideal.

The Dad's Day run is pretty cool. Lots of kids with their Dads. Before the race, there was a moment of silence for all of the Dads that couldn't be there. I thought about my Dad, who passed away in February of 2005. He was not a runner and scoffed at the idea of anyone who formally exercised. Of course, he was a farmer so, to him, if you just threw around a few hay bales, etc., why do you need to exercise? He was in great shape except for this little problem called emphysema, that finally got the best of him. As runners, functioning lungs is something we take for granted. You don't realize how precious they are until they are compromised.

I finished the race in no record speed. Every racer received a tie for Dad after crossing the finish line. A nice touch, even though I didn't have a Dad to give mine too.
Posted by Debra Horn at 12:21 PM No comments:

The organizers of the North Coast 24-Hour run where the US 24-Hour Nationals are going to be held on Oct 3-4) had a training run on the course at Edgewater Park in Cleveland this past Sunday. In all about 10 people showed up, including Connie Gardner, who is heading out this Tuesday for the 100K World Championships in Belgium. Good Luck, Connie!!
I wanted to eyeball the course so I could be 100% sure that the course would be awesome for all the runners who will be competing in October. It was a gorgeous day at the Park. Sunny, blue sky, right next to the water....

The course is a .91 mile loop. All of the surface is the same - asphalt - no concrete, dirt, or grass. It is a fairly wide path in excellent condition. No ruts, potholes or cracks. There is also no cant or camber so you will be running on a totally flat (not slanted) surface. As far as the ups and downs go, there is a very slight uphill and a very slight downhill. Otherwise, it's a pretty flat course. We will be running clockwise. This is because there is a very short section where you'll be running very close to Lake Erie (very pretty, by the way) and the thought is that if there is any wind, it will be at your back on this stretch that is most exposed.

Both Connie and I gave it the stamp of approval. I am very excited to be running the course in October and I think (assuming no horrible weather) that there are real opportunities for the "fast" runners to do really well. I know that Connie will be attempting an American Record and the course will definitely give her a good shot at it!!
Posted by Debra Horn at 9:09 AM No comments:

First the results from the FANS race in Minneapolis held on June 6-7: In the 24-hour Race, Michael Henze racked up 147.4 miles to break the old course record by 11 miles!! Kim Martin (formerly of Ohio) cruised in to win the women's division with 121.64. A great effort for her first 24-hour event. For the 12-hour Race, top male with 80.89 miles was John Storkamp. I ended up in first place for the women with 70.16 miles (FYI, these are all tentative distances so the mileage may change slightly).

Now for the race report. I think I am jinxed. This is my second 12-hour race in a row where it has rained the ENTIRE race. The race started at 8:00 a.m. with temps at 50 degrees and light rain. I thought initially this was a good sign as everything felt comfortable. The light rain persisted for the next few hours but before long changed to heavier stuff. At that point I was soaked but I added a jacket. Everything seemed OK but the rain kept getting heavier. This would have been OK but the temperature never did rise but instead dropped. The rest of the 12-Hour race, the temperature hovered at 48 degrees. Add to that some wind that developed in the afternoon and everything just got very cold. I finally got wise about 7 hours into the race when I stopped, changed the wet shirt and arm sleeves I had on and put on a dry long-sleeved shirt. This was much better although I still had soaked gloves, shoes and socks. The rest of the race was more of the same. My hamstrings got very tight - not sure if this due to the cold or just not yet recovered from Italy - so I ended up stretching every loop to make sure I didn't pull anything. I was extremely happy when the 12-hours were up and I could run to my car, turn on the heat and drive to my sister's house (where blankets, hot tea and dinner were awaiting me)! I understand (although I was sleeping in a nice, dry bed) that the rain finally let up about 3 a.m. and was somewhat pleasant thereafter. A number of people during the race, though, stopped for long periods of time due to hypothermia.

Some things I learned (or were reinforced) from this race: (1) Sue Olsen had a good idea of wearing latex gloves over her regular gloves to keep her hands dry. I'm going to stick some in my race bag and give them a try next time it rains; (2) Bring tights to a race just in case. My shorts were pretty cold on the legs and I had no other options; (3) Think about alternate fuel sources when it's cold. I had planned on drinking most of my calories (with Perpetuem) but I wasn't sweating enough and I ended up in the port-o-potty every hour. By hour six, I decided on Plan B, which was to drink lots less water and eat more solid food. Fortunately, the aid station was well-stocked so I ate chicken noodle soup, potatoes, pretzels, and peanut butter sandwiches in addition to Hammer Gel. While I was lucky, I need to rethink how to better fuel myself in these conditions; (4) At the last minute, I threw in my suitcase a very thin headband. This was a lifesaver. When the wind picked up during the race, it was actually blowing the rain sideways into my ear (I did have a hat on). After I added the headband, I was definitely warmer; (5) Resist the urge to change socks when it's raining. At points in the race, my shoes were making squishing noises they were so wet. I kept thinking dry socks would feel so good but I talked myself out of wasting time changing them (and of course, they would just get wet again anyway). Eventually, I just forgot about it. When I finished the race without a socks change and took off my DryMax socks, no BLISTERS.

Lake Nokomis took on a very different feel this year since it was so deserted due to the weather. There was brief activity early in the morning because another charity hosted a 5K event. Once that was over around 10:00 a.m., however, there was absolutely no one at the Lake except the people associated with FANS. Usually, there are bikers, people walking dogs, fishermen, boaters, etc. Very eerie.

The volunteers at the race were fantastic, as usual. I felt very sorry for them. At least when I was running I looked warmer than them. So, in the end, what is better? Hot and humid or cold and rainy? Hmmm.... I guess cold and rainy wins. Next time, though, I WILL be better prepared.
Posted by Debra Horn at 9:05 AM 6 comments:

A Fan of FANS 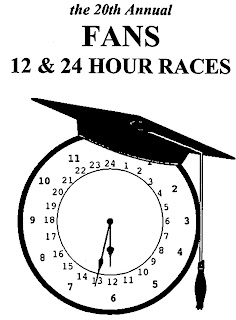 On Saturday, June 6th. I'll be running the 12-hour FANS race in Minneapolis. This year I decided to sign up for the "short" race since I just did a 24-hour race one month ago. No need to press my luck!
The FANS 12 & 24 Hour Run supports the FANS Scholarship Fund. FANS, which stands for Family Advocate Network System, is a program initiated in 1989 with a group of sixth-grade students from North and South Minneapolis. The Project has a vision of sending inner-city kids to college or to another post-secondary institution. FANS works with the youth and their families in a wide variety of activities geared to providing support for the vision.
Besides being a great cause, the race itself is first-rate. The course is a bit of a challenge, about 2 and one-half miles around Lake Nokomis, encompassing pavement, concrete, and grass with "Mount Nokomis" thrown in for good measure.
I plan to run a relaxed race so I can then have some time to visit with my sisters and Mom, all living in the Minneapolis area. They have had little rain this spring but I'm hoping any bad weather will hold off at least for Saturday. In previous years (have done 4 prior FANS), I've only encountered hot and humid weather, no rain. But, no matter what happens, it should be an enjoyable day at the lake.
Posted by Debra Horn at 9:43 AM 3 comments: