Packing for a 24-Hour Race

It can be tough to figure out what to pack when you’re traveling to a foreign country for a 24-hour race.  Luggage space is at a premium, given all the baggage charges and general hassle with multiple suitcases.  Besides the obvious stuff like team uniform, shoes, gels, and protein/carb powders, I do have a few must haves that will be in my luggage for the 2012 World Race in Poland: 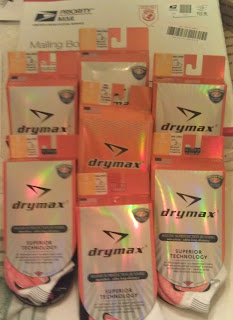 1. Drymax socks. The USATF has provided us with uniforms emblazoned with the Nike swish.  We were given written instructions on how to pin our bibs to our uniforms so as to NOT obstruct the Nike swish (no such instructions on covering up the US flag on the uniforms!)  We are not permitted to wear anything but Nike products with the exception of our shoes and socks.  This is a good thing because I am packing my Drymax maximum protection socks.  These socks have gotten me through many races and Drymax was kind enough to ship me a fresh supply for the race.  Thanks, Drymax!
2.  Watch. You never know what information you’ll get during the race and so I like to keep track of my lap splits as well as my lap numbers.  It’s hard to find a watch that can record 150 laps that I CAN SEE!  Garmins don’t work for me because their display is too small.  I just bought a HUGE men’s Timex watch and will try it out for the first time at the World race. 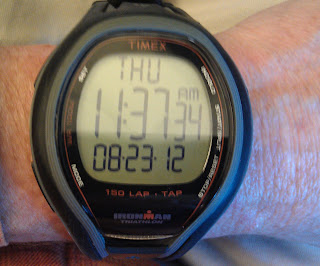 3. Ginger chews.   I prefer Ginger Ale but if we can’t find any, these will due for mild stomach issues.
4. Cranberry pills.  General kidney health.
5. Bandana.  I only want one in a race when I don’t have one.  Good if the weather is hot to wrap around your neck.
6. Sponges.  Same as No. 5
7. Sunscreen.   It seems rather obvious to bring, but not to me.  I rarely run when the sun is up.  I feel like a vampire.  I’m either running before sunrise or after sunset.  I usually forget to put any sunscreen on during these 24-hour races and pay for it later.
8. Duct tape.  You never know what you might need it for.  I’ll be marking all my stuff with it (a nice hot pink color) as the crew will be trying to keep track of 12 runners at once in a very small area.  I’m sure before the race is over, someone will need the duct tape for something else!
9. US Flag.  Good to hang in our aid station so it’s easy to find.  This year, there will be 36 countries, which means 36 aid stations.  Since the aid stations are set up alphabetically, the US is usually last IF the host country is using the English spelling.  In any event, it’s always nice to have a reference point every lap.
10. Good luck charms.  These change with every race but I have a few packed.  I will post pictures of them after the race if they bring me luck!

The roster of runners competing at the World 24-Hour Championship in Poland has been posted on the IAU website.  In spite of  being cancelled last year, the World race continues to grow in popularity.

In 2010, when the last World 24-hour race was held in France, runners from 30 countries participated.  The number of women's teams totaled 16 (a team must consist of 3 runners from a country).

In 2010, the French women took the Gold medal, following by Italy (Silver) and Australia (Bronze).  The current US women's team has four different runners from the 2010 team and we are all excited to try and bring home a medal.

The US men also have four different teammates from 2010.  In 2010, the US men finished in the medals, locking up the Bronze along with a 2nd place finish for Scott Jurek.  This year, Scott won't be running but the US men's team is super strong.  I am expecting them to secure a spot on the podium.

Good luck to all and see you soon in Poland.
Posted by Debra Horn at 4:03 PM No comments:

I'm finally getting to the "home" stretch in training for the World 24-hour race with less than one month to go.  I have to admit I am getting a little bored with running so much and I am probably the slacker among all of my teammates.  My crazy team member, Carilyn Johnson, has been racking up 140+ miles a week.  I cannot even fathom that!

In order to keep some of my sanity while training, I've started listening to audiobooks.  I have learned that there is an art to picking the right audiobook book, not always the most literary book is the best one to listen to for hours on end.  My mind tends to wander as I'm running so if the plot is too complicated, I get hopelessly lost.  In the last few months I've listened to the following books that were good listening "reads:" The Double Bind and Skeletons at the Feast by Chris Bohjalian, Goodbye Columbus by Philip Roth, Wild by Cheryl Strayed and A Free Life by Ha Jin.

When I am not wrapped up in audiobooks, I've been out running for the Epilepsy Association.  Again this year, we are sponsoring a program called "The Virtual Runner."  You can sign up at the Epilepsy Association website.  From August through October, you log your race miles (can be run anywhere in the World and any length).  At the end of the race period, the runner with either the most miles run or the most money raised wins a prize.  We are looking for more runners, so please sign up if you're looking for a way to give back to a charity through running!

We kicked off the Virtual Runner this past Saturday with a training run at Edgewater Park, the home of the North Coast 24-hour race.

Everyone ran some loops (some running 20 miles while I opted for 6-ish miles) and then we chowed down on breakfast.  It was awesome getting to meet new runners and get together for a good cause.  While listening to audiobooks passes the time, this is a much more rewarding way to run!
Posted by Debra Horn at 1:16 PM 1 comment: