No Eight-Ender at the Evergreen 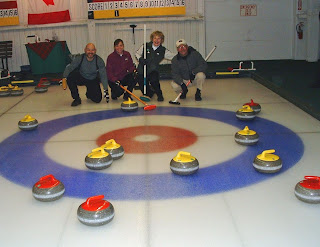 We were not able to recreate our eight-ender magic at MCC's Evergreen this past weekend. Last year, at the end of the season Ron & Wendy Busch and Roger and I teamed up in the Club's final bon spiel and had what all curlers dream about but few actually attain - an 8-ender!

Since Ron and Wendy had chaired last year's Evergreen, they had an automatic entry into the 2009 Evergreen and asked Roger and me to play on their team. Photo Below. 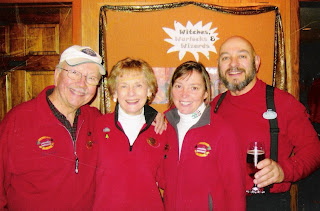 We played three games and ended up 1-2. The losing games were close so we still had fun. Unfortunately, as the weekend wore on, the evil enemy "FLU" reared its ugly head and did a number on me. I was out of commission running for four days. I am still pretty congested but started back at it to keep up conditioning for next week's Delano 12-hour race. Fluids, fluids, fluids..... I WILL get over this before the 14th!