We just returned this past Tuesday night from Italy after touring around the Piedmont and Tuscan countryside. What a beautiful country. Although I had a relaxing vacation after the World race, the race is still fresh in my mind so here goes my race report.
We left for Italy on April 28th, landing first in Venice. I wanted to have plenty of time to acclimatize before the race. We had a relaxing few days in Venice, strolling along the canals, touring a Murano glass factory, climbing the steps to the top of San Marco Cathedral and eating gelato. We hooked up in Venice with Jamie and David Donaldson as well as my sister, Sue and her husband Kirk. The first day in Venice it actually hailed! That would be the only bad weather we experienced during our entire stay in Italy. 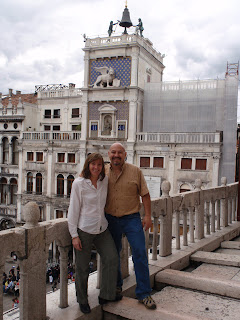 On top of San Marco in Venice

On Friday, we took an uneventful 3-hour train ride to Bergamo before meeting up with the rest of Team USA. There, I was first introduced to teammates Annette Bednowsky and Jen Van Allen. Jen had just arrived a few hours earlier! We received our uniforms, chip, numbers (must wear front and back) and also received a cool jersey from the Bergamo running club. Next, we all changed into our official team uniforms and headed to the opening ceremony. This was quite a spectacle! The ceremony was held in a large auditorium and each country paraded on the stage where the country’s flag was projected and every runner was introduced. This was quite thrilling to see all of the runners and different flags and colors. After the ceremony, we headed to the pasta dinner. Mingled with runners from Great Britain and Australia and traded war stories. A number of us then walked the course. It appeared to be more up and down than was advertized. The race organizers were also busy laying carpeting and other materials down on some of the rougher areas of the course although not all of the cobblestone was covered up. I also noted that there was quite a bit of cant to the road and made a mental note to run on the inside of the road (i.e., the flatter part) as much as I could. 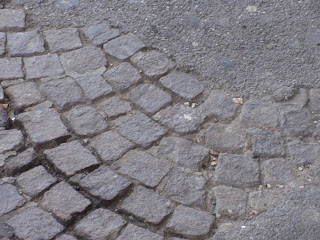 Part of the course - Trip hazard!

The next morning the race started at 10:00 a.m. The sky was cloudless and the temperature was starting to get warm before we even started. We all met at the US aid station and took photos before heading to the starting line. Prior to the race, I had figured out splits for anywhere between 9:00 to 12:30 minute miles. I put the splits on an armband so I could keep track of how fast I was running. Since the course was about .7 of a mile, it was hard to figure out just looking at the clock how fast I would be running unless I had the splits worked up ahead of time. I was hoping to run between 9:30 and 10:00 minute miles for as long as I could. 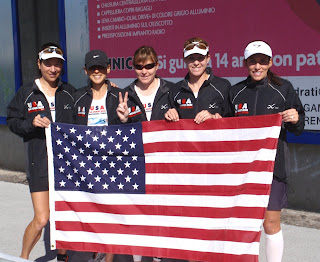 Annette, Jen, me, Carilyn and Jamie 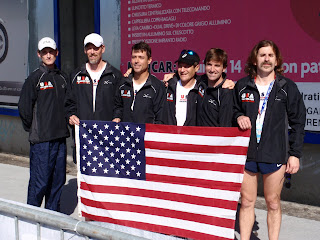 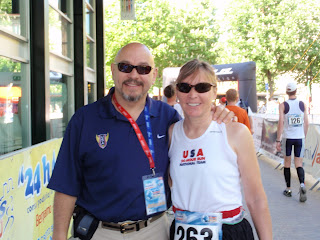 Roger and me before the start.

Once the race started, I had planned to listen to my I-pod. Early on, however, Carilyn and I had started running the same pace (between 9:30-9:45) so we hung together for about 2 hours catching up. Every once in a while, Jen would join us and we’d all chat together. I think even once Annette joined the group so we had 4 USA runners all hanging together having a great time. 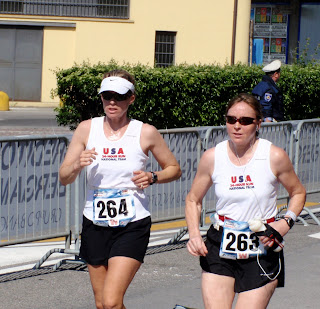 With Carilyn, taking it easy early on.

After awhile, Carilyn and I split and I was running by myself. The hours seemed to fly by (at least for the first 6 hours). The course started out fairly flat before taking a left turn that took the runners uphill past all of the country aid stations. Being alphabetical, USA was the last aid station (next to Sweden) which was pretty convenient for getting supplies quickly. After the aid stations, the course gradually turned right, leveled out, then went left again before going uphill over a canal. Then another left turn and the course had a nice long downhill section. This downhill section was shaded during the day and there was also a slight breeze blowing. After the downhill (and where the port-o-potties were located), a short steeper uphill followed by a left turn before arriving back where we started. The course would get ingrained in one’s memory – I looped it about 155 times (give or take a loop…)

I was surprised how the heat did not bother me initially, maybe because I took it easy during the hotter part of the day. I think the temperature hit about 80 degrees. This was a bit toasty, coming from Ohio where I did not have too much heat training yet! After about 7 hours, I suddenly had a spell where I didn’t feel too good. Dr. Andy came to the rescue, giving me a ginger pill and assuring me that I would feel better after 1 lap. True to his word, the pill worked its magic and no more nausea! 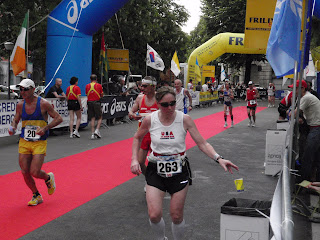 After 12 hours, I did stop and change socks. Due to the excessive left turning, I was putting quite a bit of pressure on the inside of my right foot, creating some blisters. I stopped to get them popped, put on new socks and my feet were good to go for the rest of the race.

Other than that, I had two longer stops (at about the 15 and 19 hour marks) to get stretched out by Dr. Andy. In between those stops, I also stopped every few hours to stretch my legs out. Due to the ups and downs on the course, I felt it wise to stretch both hamstrings and quads every now and then.

The US race crew had asked during the race if I wanted to know my standings. I said “no” since I knew it was really unimportant until close to the end of the race. Where you are 6 hours into the race doesn’t mean too much since things have a way of changing over 24 hours. I would not know until the awards ceremony how many miles I ran (128.831 miles) and what placed I finished in (10th woman).

The race was a bit of a blur but one thing that became obvious was that the US men were not having a good day. They were all in varying amounts of distress and that was sad to see. It was just one of those days for these very talented runners.

On the women’s front, I was told about half way through that the US women were in 2nd place but that Great Britain was very close behind. I started keeping an eye out for the Brits and began noticing that the heat was getting to them in a big way. As the Brit runners fell behind, Germany mounted a challenge to our 2nd place slot. Again, the Germans could not sustain a hard effort and all of the sudden the Italians were in 3rd place and closing in on us! “Can you run a little faster?” Dr. Andy asked. The idea was to create such a big lead that the Italians would not be able to catch us in the last few hours. That was not what I wanted to hear with just hours to go (I really wanted to start walking!) but I tried to pick up my snail’s pace, especially when I saw two of the Italian women flying around the course. The entire last few hours I was very nervous about the Italians catching us. It turns out that we beat them by about 6 miles. 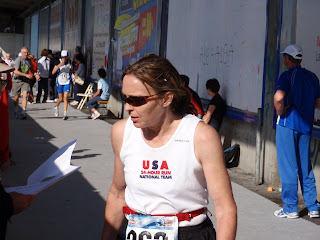 Checking the Team standings with a few hours left in the race.

All of the US women put in a fantastic effort and ran really strong. We all had varying issues throughout the race but everyone dealt with them and hung in there for the team. I was very proud and excited to be on the podium accepting the silver medal with these wonderful athletes! I hope to see everyone again in Cleveland for the U.S. National 24-Hour Championship. 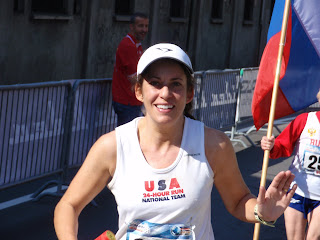 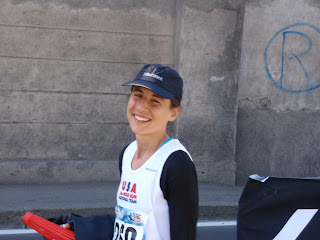 Jen hanging tough until the end. 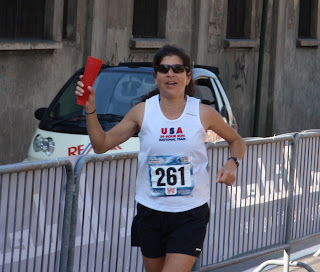 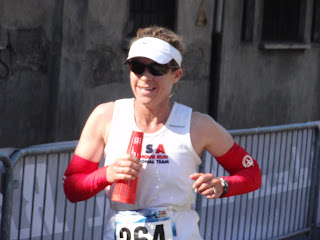 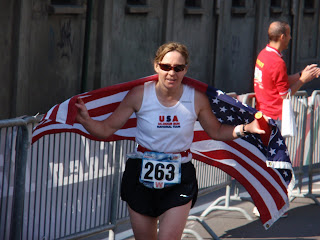 Me on last lap - Very Happy! 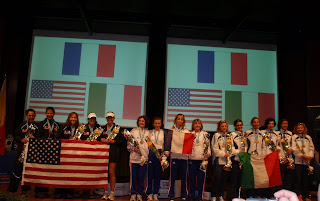 Thanks to our wonderful Aid Station workers, my SO Roger, David, Tim, George, Donna, Peter, Grant and Spencer. Very special thanks to Bill Allen who was forced to drop out of the race early due to an injry but put in long hours at the aid station helping the US runners. DryMax socks and Aruba sunglasses were a big help during the race. CW-X donated our uniforms so we could look good on the podium. THANKS!