Yes, You Can Run With Scissors 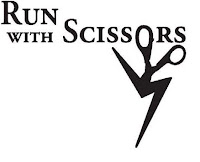 Halloween, no better day to run a double marathon trail race (two loop course).  I was curious about this newer trail race and signed up for the Fourth Annual Run With Scissors race through the Cuyahoga Valley National Park.  It was perfect weather, not too hot and not too cold.  We would run through two well-stocked aid stations in addition to the start/finish area.  At the second aid station (about mile 11) we would complete a five mile loop before heading back through the aid stations to the start and then repeat the entire course again. 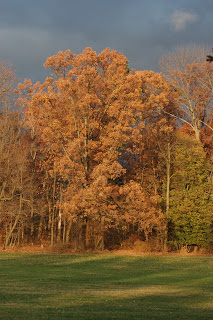 The race was supposed to start at 5:00 a.m. so I was up at 3:15 to get ready and then driving to the start about an hour away.  That was definitely a bit of a challenge for me.  With the early start, we would be running in darkness for at least a few hours.  After arriving at the Ledges shelter area for the race start, we learned that there had been a serious accident involving fatalities on one of the roads that runners would travel on to get to the race.  That was a very somber moment.  We were told by Roy Heger, the wonderful race director (in costume as Death), that we'd delay the start until 5:30 so everyone registered could get to the race before it started.
At 5:30, the race began and I turned on my headlight and discovered that it didn't work!  Not a good omen!  I was planning to just run a nice and slow race anyway so I got in a cluster of people and hoped that I could see good enough until dawn broke.

The trails were in great shape (this is from a non-trail runner so they really were probably in excellent shape) but LOTS of ups and downs with only an occasional "flat" part.  There was some mud and at least six stream crossings so lots of stuff to keep me focused.  After about an hour, Frank D. ran by and had an extra flashlight that he graciously lent me.  That was a big help.

Then the miles just kept ticking by.  At the second aid station, we were given scissors and told that to prove that we had completed the 5-mile loop we had to cut a page out of a hanging book.  Fun stuff.  The book turned out to be hanging by a skeleton and was a book having to do with anatomy.  Along the course there were also plastic pumpkins with Halloween candy.  Very festive!

I complete the 1st loop in about 5:30 hours.  I was taking my time and walking up all the hills as well as walking down the very steep one.  For part of the first loop, I hung with a fellow runner, Michael, who kept me entertained.  Thanks, Michael!  The second loop  was even slower, about 6 hours.  All I can say is that I really need to do hill work because my legs are still killing me.

At the finish, I learned that I was "First Female Grand Master."  In truth only three women finished the double (including Connie Gardner who finished in a little over 8 hours!), most runners opting for the single marathon course.  There was a very hearty meal waiting for us stragglers, which was most appreciated.  A wonderful and well organized race!
Posted by Debra Horn at 4:54 PM