Pardon the lag in posting.... but I've been busy curling!


First a quick report from the USCA Seniors, which were the first weekend in February in Bismarck, ND.  That weekend coincided with the worst snowstorm of the season that shut down a large portion of the country... nerve-wracking travel and one team from Maine cancelled due to the snow.  We also started the competition late in order to wait for all of the remaining six teams to arrive in one piece. 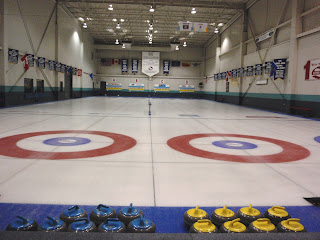 In a nutshell, the Capital Curling Club was a very nice facility with four sheets of ice.  We started strong, winning our first game against Wisconsin.  After that, our team struggled and we definitely did not play up to our potential.  We won one other game against North Dakota and lost to the eventual winner, Minnesota, as well as teams from Illinois and Washington.  We finished in a three-way tie at 2-3 with Wisconsin and Washington.  Since we had better scores for the draws to the button, we "officially" ended up in third place.
In between games we tasted some of the local food (deep fried cheese sandwiches!!) ..... 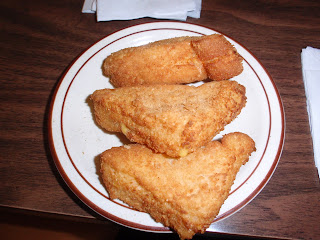 And toured some of the sites.  It was pretty cold so mainly we stayed indoors!
﻿

Overall, it was a good experience.  While my lucky socks didn't help us win more games, I will maybe give them a try at my next race to see if they work better when I'm running...
﻿﻿
﻿﻿  ﻿
Posted by Debra Horn at 10:26 AM