Hanging Out With New & Old Friends At The Fair

It's been awhile since I ran a race.... work, curling and life in general have just got in the way.  When my schedule miraculously cleared, I jumped at the chance to try another 48 hour race in New Jersey at Three Days at The Fair.  The race took place on May 13-14, in conjunction with 72, 24, 12 and 6 hour races.
Going in to the race, I was hopeful that I could reach the 200 mile mark.  I thought I was capable of doing that at Across The Years this past New Years but just got annihilated and beaten down by the incredibly bad weather.  If I had good weather, I was thinking no problem....
Of course, then I totally forgot about actually TRAINING for the event!  Going in to the race, I had done limited long runs, basically one 4-hour run since New Years.  Would that be enough???
My friend, Courtney, rode with me to NJ, helped set up and stayed at the race for the first 5 hours.  She then went to NYC and planned to return to help on Saturday night and drive me home to Cleveland on Sunday.
I set up my aid with Phil McCarthy, who I knew was trying for a new 48-hour record.  I also had e-mailed back and forth with Sabrina Moran, a young ultrarunning phenom.  She was intending to run unsupported so I invited her to our "party."
﻿﻿

Race day started out cool and cloudy.  This was perfect.  The location was the Sussex County Fairgrounds.  Most of the course was asphalt with a little bit of gravel and grass thrown in the mix.  The first 5 hours of the race went totally as planned.  I was running at the exact pace that I wanted to.  Sabrina was whizzing by me but I expected her to run a fast 24 and then run out of steam.  I was planning to run slower but keep cranking out miles.
In the afternoon, the weather started to get humid and warm.  The sun broke out from the clouds.  I'm not exactly sure how this happened but around hour 7 I started feeling sick...  I usually have a cast-iron stomach so this was somewhat new and I was not really prepared.  I took some Tums and ginger pills.  That did not help.  I kept running but in hindsight was not taking in enough calories.  I just couldn't eat anything.  This was not a good sign.  I knew in my mind that this was a recipe for disaster but my body refused to do anything about it.  When I hit the 100 mile mark around 20:30 hours, I decided to take a break to get my stomach under control.  I fell asleep for about 2 hours and then just sat in my chair watching the runners go by.  Every time Phil came around, he yelled at me to get up and start moving.  I eventually was shamed into moving and shuffled back on the race course with about an hour to go in Day 1.  At that point, my quads had turned to cement and I was reduced to walking.  I ended the first 24 hours at around 104 miles.  Sabrina was super strong and amazing, logging about 130 miles.  Phil was just a MACHINE on pace for an American Record!
﻿

For the start of Day 2, I was trying to run but I don't think you could tell my "run" pace﻿ from my "walk" pace.  Sabrina was not feeling well and took the opportunity to go home (10 minutes away) and regroup.  When she left, I wasn't sure if I'd see her again.  The rest of the day was a bit of a blur.  I did stop again in the afternoon for about 45 minutes for a nap.  My stomach had started to cooperate and I was able to eat and keep things down.  Unfortunately, my legs were like lead and I couldn't run.....  Phil was still amazing.  Anna P. had started the 24 hour race that morning and she was very encouraging every time she lapped me (which was many times!)
Late in the afternoon (I think), Sabrina reappeared.... energized and ready to run.  She again whipped around the course in what seemed like amazing speed.  I just kept plodding along.  As darkness fell, it started misting, which felt very nice.  Sabrina had slowed and we ended up walking together for a few hours, chatting about many things.  I had calculated out in my mind what my mileage would be if I kept up my excruciatingly slow pace and wasn't too happy about that.  Even best case, I would not hit my mileage from ATY.  If I had ANY run left in my legs, I would have stuck it out.  But having walked for HOURS already, I decided when I hit 150 miles that I would call it a race.  With around 9 hours to go (midnight), I retired to the tent.  Around 2:00 am, Courtney cam back from NYC and we drove to a hotel for a nice hot shower and a bed!
In the morning, we drove back to the race and I discovered that Phil had indeed set a new 48-hour American Record  by 9 miles with 257 miles!!!!!  I was so happy for him.  Sabrina was the women's 48-hour winner with 172 miles and Anna won the 24-hour outright with 115 miles.  I ended up in 2nd place and received a very cool piece of pottery and a 100-mile coin. 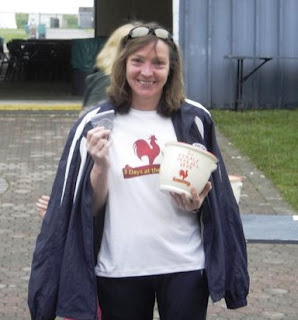 Lessons learned?
1. I cannot fool myself into thinking I can squeak by for a 48-hour race with minimal training and expect big miles.
2. I need to be better prepared for the unexpected (i.e. bad stomach) and get it under control.  On my to-do list is to contact Dr. Andy for advice!  This was one of my first timed races without his sage direction!!
3. Sometimes these races are not about the miles but the people you meet.  Although my mileage goal was not met, I came out a big winner by all the wonderful runners and volunteers I got to talk with throughout the race and the new friends I made.
Posted by Debra Horn at 2:18 PM