A confluence of events came together at the North Coast 24-Hour race (Sept. 17-18, 2011) in order for me to reach a long-held goal of hitting 130 miles in a 24-hour race – excellent weather, a fantastic crew and a little bit of luck.

Training for this 24-hour race has been interesting.  I typically am not a high mileage runner.  I usually though run at least a few "faster" marathons and at least one 5-6 hour training run before a 24-hour event.  For the NC24 race, due to other time commitments, I wasn’t able to get in any long runs.  After the 48-Hour race I ran in early May, my longest training run up to the NC24 has been 20 miles.  Since I didn’t have time for longer runs, I tried to double up, running 10 miles in the morning before work and 10 miles at night.  I never was able to hit 100 miles in any given week, but came close a few weeks.  I can also say it was a first for me to get out the door at 4:00 a.m. to squeeze in a number of 20-milers before work.  Just to mix things up, I also met my friend, Karen, at the high school track once a week  for some speedwork to try and energize my running since I felt I was getting way too slow.
﻿﻿﻿﻿
﻿﻿﻿With my somewhat low training miles, I was a bit nervous going into the NC24.  The field of women runners was very strong and only the top two women were guaranteed a spot on the 2012 national team.  My only goal going in to the race was to hit my elusive “130.”  I really didn’t see a second place finish as a possibility.

Race day dawned and indeed the weather forecast was right!  Perfect running weather. At the start, I even resorted to gloves and arm warmers, which I peeled after a few hours.  My original plan was to start about a 9:30 minute per mile pace for the first three hours and then go right to a 10:00 pace for hours 3-6, and then every 3 hours adding 15 seconds to my pace.  Because the weather was so good, I abandoned that plan when I started running and hoped my exuberance would not be costly.  I started at a faster 9:15 pace and then dropped to a 9:30 pace for hours 3-6.

Everything was going like clockwork until about 4:00 PM when I started feeling kind of sick.  This coincided with the sun coming out and actually getting somewhat warm.  The way the course is configured, the northern side (by Lake Erie) was breezy and cool.  As soon as you turned the corner on the south side, the wind stopped and it was HOT.  Courtney, my crew chief extraordinaire, was on top of things and dug out some anti-nauseous pills and tons of ginger ale.  I also started increasing electrolytes.  Something worked and after an hour or two, I recovered.  From that point on, I felt remarkably well the rest of the race. 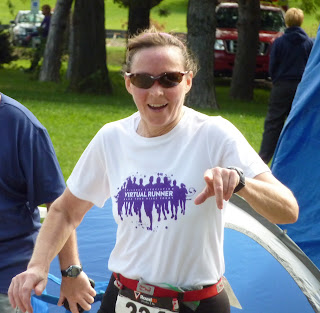 I have been tweaking what combination of calories to consume during a race.  This time, I mixed 1 1/2 scoops of Perpetuem to fit into a small flask that I drank every hour.  I supplemented this with water as needed and hammer gels and hammer solids.  I can now say definitively that the solids are not anything I can use over very long periods of time.  Also the Perpetuem strawberry and coffee flavors were pretty good while the unflavored and orange got pretty nasty.  I was able to keep consuming this mix for most of the race.  I also ate oatmeal, oranges, peanut butter sandwiches and bananas and my friend’s special “long run cake.”  Courtney was excellent monitoring my calorie intake and kept shoving stuff in my mouth!!

One new product I tried were these caffeine strips called “Sheets.”  I saw them advertised in a magazine a few weeks ago and thought I’d give them a try.  They actually had a strong bitter taste but dissolve on your tongue so they are convenient to consume and easier on the stomach than coffee, Red Bull, etc.
I don’t know if it was the “Sheets," cooler weather, almost stepping on a rat, or something else, but once midnight hit, I felt energized and was able to run at about a 10:15 minute mile pace from midnight to about 3 a.m.  I felt like I was "flying" because most people are either trudging or off the course at this point. 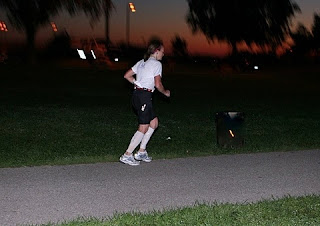 This year the race had a leader board that I didn’t pay too much attention to during the first half of the race.  As is typical, most of the runners on the leader board go out too fast and fade before the race is over.  That certainly happened at this race… for different reasons both Jamie Donaldson and Anna Piskorska dropped.  Connie was her phenomenal self and unstoppable.  Lisa Bliss was running very strong.  I don’t think it was until the middle of the night before I caught up with her and got a lead.  Every time I saw Lisa she looked so strong so I knew I had to keep running once I moved into the number 2 spot.

There were a few glitches in the timing system during the first half of the race.  I was pretty sure that some of my laps were missed.  According to the official count, I hit the “130” mark with about 15 minutes to spare.  I wanted to quit then but Courtney wisely said, "Keep running…. You need one more lap for extra measure.”  I trudged on for one more lap.  With 5 minutes left, I kept running for a few minutes and then called it a day.  Final mileage, I thought, was 131.75, a little over 2 miles better than my previous PR.  After getting the laps splits and comparing them to my watch splits, I could easily see that some of my laps were indeed missed.  Bonus now for me is that I am getting"credit" for 3 additional laps so my actual mileage was 134!!!!

When all the dust settled, Phil McCarthy ran a solid race and was the men’s champ with 153 miles and Connie Gardner was the women’s champ with 144 miles, just missing the women's American Record by about 1 mile.  I fully expect to Connie to break that record one of these days and I hope I am there to witness it!!  Jonathan Savage was 2nd with 146 miles and he earned a spot on the national team.  Still in shock over this, I also am now guaranteed a spot on the 2012 national team as the 2nd place female.  Lisa Bliss was 3rd female with just shy of 126 miles and could possibly qualify for one of the open spots on the national team.

Lessons learned?
1. Expect the unexpected.  I’m feeling a little creaky and old at 52 to be on the national team but I guess that gives me incentive to stay as fit as possible for another year!
2. Stay out of the medical tent!  In my typical 24-hour races, I have to make at least one stop at the medical tent to get something fixed!  I love Dr. Andy and his medical students but this year I got to chat with them AFTER the race, which saved me a lot of time during the race.
3. Don’t overestimate the value of a well-organized crew.  This race, I thought absolutely about nothing…. To the point that I didn’t know who had won the men’s race until after the race was over….
4. Maybe my haphazard training program wasn’t so bad after all.
5. Comfort is key.  No chaffing or blisters this race.  My Epilepsy Association tech shirt worked perfectly.  And of course, Drymax socks were on my feet the entire race.  Thank you Drymax for your continued support of the National 24-hour Championship!!