Due to the 24-Hour World competition taking place in September this year, the 2012 US National 24-Hour Championship has been scheduled by USATF to the Spring.... May 5-6, 2012 in Cleveland.  The venue for the race is exactly the same as the Fall North Coast 24-hour race - Edgewater Park, approximately a .9 mile loop. 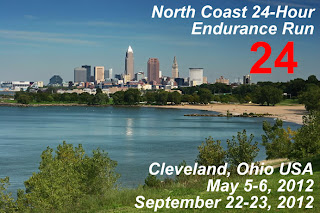 Having run the race three times, I can testify that the course can't be beat.  Super fast times are for the taking... and while this race will not automatically qualify anyone to run at the 2012 Worlds, you can still qualify for the World race if you run lots of miles!  At this point, according to USATF representatives, race results from the Spring 2012 National Championship could qualify a runner for BOTH the 2012 Worlds (in Poland this September) AND the 2013 Worlds (in the Netherlands in May 2013).  I think that is an excellent incentive to run this race!!  I will be there.
Posted by Debra Horn at 6:22 PM