This quote sums up my race at the 2013 World 24-hour Championship.  My race miles added up to a not so impressive middle-of-the-pack finish. My amazing team mates (Sabrina Little (American Record of 244.669K), Suzanna Bon (236.228K) and Traci Falbo (229.702K) came to the rescue and finished 2, 3 and 4 to grab the women’s Team Gold medal.  My race didn’t end up counting but witnessing the performances at the World Championship was something I will never forget.

My boyfriend, Roger, and I arrived in Holland about 10 days before the race.  I thought this would be a good way to taper and see the country at the same time.  The one and only time I’ve been to Holland was back in 1982 and one of the things I did was visit the Heineken Brewery.  I still have my ticket from back then, when the entrance fee was 1 Dutch Guilder and that got you unlimited refills of beer.  That’s the equivalent of 58 US cents!  So we did go back and the “Heineken Experience” was quite different.  Besides being limited to 2 small glasses of beer, the entrance fee increased to 18 Euros (or about $23.00)!  Times have changed.

After spending a few days in Amsterdam, we headed to the countryside for our 5-day cycling trip along the canals to the towns of Haarlem, Leiden, Delft and Gouda.  The scenery was gorgeous and the people very friendly.  And the bike paths can’t be beat.  We had perfect weather, sunny and cool.   And the food: white asparagus, stroup wafels, cheese and pancakes.  Delicious!  ﻿﻿﻿﻿﻿﻿﻿﻿﻿
﻿﻿﻿﻿﻿﻿﻿﻿﻿

Thursday night before the race we headed to the hotel where the US team was staying about 15k from the race start.  I had seen earlier weather forecasts, which called for rain only on Friday.  Obviously, I didn’t look at updated forecasts as that would change.

Friday afternoon we headed to the opening ceremonies.  Many Steenbergen residents had braved the weather and had come out to see this strange mix of runners from 34 countries.  Flags flew, the local school band played and it was a very festive mood.  The rain held off but skies were threatening.  I have to say that the parade, through the streets of Steenbergen to the town square, was inspiring.


I awoke on Saturday morning to light rain and cold temps.  By the time everyone got to the start for the noon gun, the rain had stopped although temperatures remained cold.  Since Team USA didn't have any "official" race tops that were for cold weather, I put on a large long-sleeved shirt under my race singlet.  That made me look 20 pounds fatter but I wasn't there to win any fasion contest!  I just needed to stay warm. 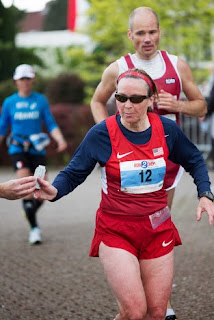 The race course was on some very pretty streets of the village with little elevation changes, exactly as advertised.  The surface was a mix of different kinds of brick pavers but all in very good shape.  The race also had a giant computer screen so that even with my poor eyes I could see my laps and mileage every time I passed the timing tent, a very cool set-up.  An added treat was the announcer.  Hard to imagine but there was continuous commentary from the start of the race until 10 PM, which resumed about 6AM until the end of the race.  Loudspeakers were set up along the course so you could hear the announcer at all times.  This was pretty neat as I always knew the position of the top runners as well as the team standings.  I think the announcer had the toughest job of all!

A special mention to Bib No. 200, Vilnis Pliete of Latvia.  Nice race!  We kept running into each other on the course so send me a comment if you’re reading this!

About eleven hours in to the race, I was slowing down.  The weather was quite cold and my legs were freezing.  I stopped at the aid station and got stretched by Dr. Greg and then did a quick change into running tights.  That stop took about 30 minutes but I felt refreshed and I was able to pick up the pace for another hour or so.  Sometime after that, the rain started not sure when.  I got soaked to the bone before I decided to put on a rain jacket (not so smart to wait).  These rain jackets were not meant to run in and were actually not breathable.  So I alternated between being cold and hot in my soaking clothes.  It apparently hailed at some point.  I don’t remember this at all as I had my jacket hood draped over my head…. I just kept trudging on.  Just when I thought the rain had stopped, it started pouring again.

Before the announcer stopped for the night, I knew that my teammates Jon Olson and Sabrina Little, were high up in the standings.  As the night turned to daylight, most of the US runners were looking very strong every time they lapped me!  Around 3:30 AM, the rain seemed to stop and I stopped again for about 40 minutes to stretch and change my waterlogged shoes and socks (Thanks, Drymax for the many pairs of socks!).  My tights were really wet and cold but I didn’t have anything to change into so I sucked it up and went back on the course.  With the dawn, it became clear that there was a lot of carnage over the course of the night.  Many runners had stopped or were slowing down, myself included.  So it was exciting to see that the US men were running 1, 2 and 10 and the US women were running 2, 3 and 4.  WOW!  It was also amazing to see Mami Kudo, who ended up breaking the World’s Best Performance for a Road 24-hour with a 252.205k (156.713 miles).  At the end of the race, she was smiling and looked like she had just run a 10k!  The US ended up with 4 individual medals (Sabrina – Silver, Suzanna – Bronze, Jon Olsen, - Gold and first overall with 269.675K and John Dennis – Silver and second overall with 262,734K) and a Women’s and Men’s Team Gold medal.  Historic!

I walked the last 4 ½ hours of the race but made sure to cheer on my teammates.  I finished with a little over 192K (almost 120 miles) and was 135 out of 243 total runners or 54 out of 89 female starters.  Not that good but, while my race didn’t count, as Albert Einstein said, “not everything that counts can be counted” and my experience at the 10th World Championship was one of these experiences -- priceless. 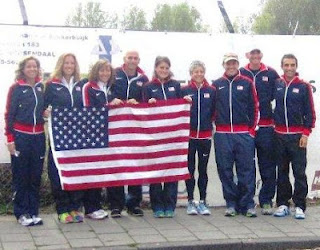