The new Northern Ohio Marathon was scheduled to take place on the same day as the popular local Towpath Marathon, October 13th.  As fate would have it, however, with the US Government shutdown not being resolved and the Towpath Marathon taking place within the Cuyahoga Valley National Park, the Towpath had to be rescheduled to November.  While I had registered for the Northern Ohio Marathon months ago, it was clear on race day that many Towpath refugees had come to run. 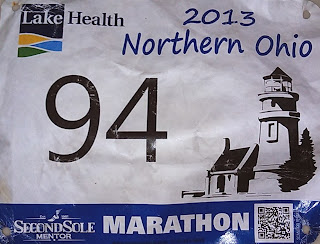 Although the registration was a bit chaotic with many last-minute registrants, the race itself only started a few minutes late and began with a nice downhill to a road running alongside Lake Erie.  The theme of the race incorporated wonderful views of Lake Erie.  At one point, we ran for a stretch on a sandy bridle path overlooking the Lake, then through Mentor Headlands State Beach and also through many beach communities.  There was lots of crowd support as it looked like many residents came out to support the race.  The course was relatively flat until at least three good size hills toward the end of the race.


The weather was good, cloudy and not real hot although it was pretty humid.  I had not been training too much so was just hoping for a sub-4:00 time.  I ended up crossing the finish line around 3:53, good for a Boston Qualifier (always nice to get just in case) and was later surprised to see I came in 2nd in my age group.  The speedy Pam Rickard (involved with an incredible charity, Runwell) beat me by many minutes to take first in our age group.  She would have been even faster but she stopped many times to take pictures!  That was the only time I could catch up to her!!  Guess I need to start training....