At the end of September, we drove north through the Thousand Island area of New York and then on to Ottawa for the 2015 Sri Chinmoy Self-Transcendence 24-hour race.
Sri Chinmoy was an Indian spiritual master who taught meditation in the United States.  He also advocated athleticism to achieve spiritual growth and enlightenment, including distance running.  This 24-hour event has been in existence for 35 years and is put on by members of the Sri Chinmoy Marathon Team.
Try to be a runner, and try all the time to surpass and go beyond all that is bothering you and standing in your way. Be a real runner so that ignorance, limitation and imperfection will all drop far behind you in the race.
Sri Chinmoy, The outer running and the inner running, Agni Press, 1974
For a number of years the 24-hour race has been held indoors at a 400 meter track covered by an inflatable dome.  I was intrigued by the idea of seeing how far I could run in a controlled environment – no beating sun, no wind and daylight all the time.  I planned an ambitious race, seeing if I could beat my prior 12 hour best of 72 miles; 100 mile split of 16:52 and 24 hour best of 134 miles.
﻿
In keeping with a very simple approach to the race, there was no chip timing.  Instead, I was assigned to a personal lap counter.  Over the course of the race, the individual would change.  They were all, however, very diligent in recording my laps and always smiling and encouraging.
The course had signs posted along the oval with spiritual quotes from Sri Chinmoy.  Every six hours, we changed directions and got to see new quotes.  In the middle of the night, a group of team members performed meditative music with sitar-sounding instruments.  I thought this might lull me to sleep but it did not!  Very fascinating. 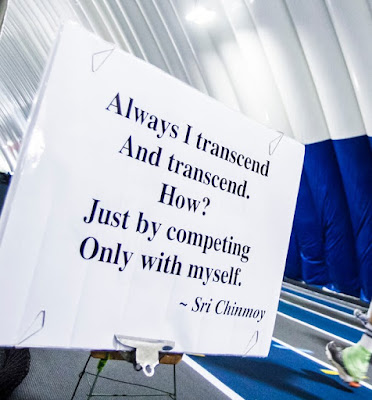 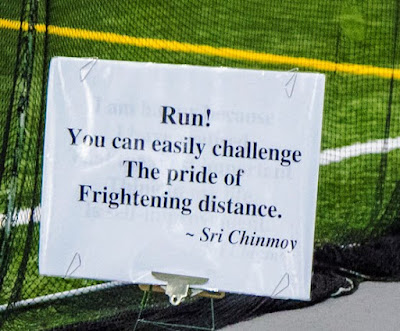 I was probably too ambitious in my pacing and after 8 hours was feeling pretty beat.  At that point, I knew it was going to be a long race….  I walked quite a bit the second half of the race and ended with about 120 miles, which was good for first place woman and second overall.  Not exactly the distance I wanted but as Sri Chinmoy said:
A great champion is he who wins all the races.


A great champion is he who participates in all the races.


A great champion is he who does not care for the results of the races — whether he is first or last or in between. He races just to get joy and give joy to the observers.


A great champion is he who transcends his own previous records.


A great champion is he who maintains his standard.


A great champion is he who remains happy even when he cannot maintain his standard. 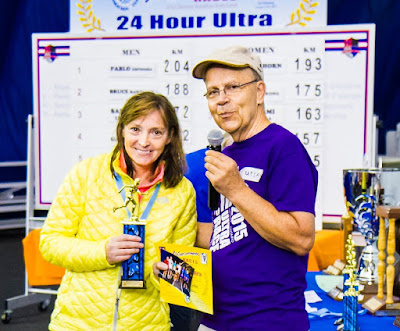