Ice Is My Enemy And Friend

For the last month, we've had continuous snowfall and the resulting ice that develops from the slight thaws. My last long run outside was a 50-mile fun run on January 3rd. Since that time, I've been relegated to the dreaded treadmill because (1) it's pitch dark outside both before and after work; (2) the sidewalks and paths are covered with ice and (3) running on the road is not an option because the huge snowbanks leave no place to bale when a car bears down on you. Needless to say, my training for the World 24-Hour Challenge in early May is not progressing as I would like. To add insult to injury, it's been snowing since last night, adding about a foot of new snow and now is a mix of both snow and rain coating everything with more ice. 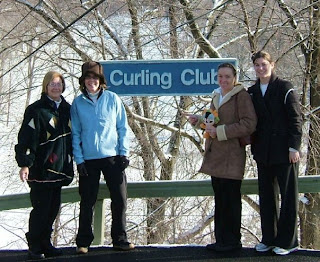 On the bright side, however, the curling ice is great. My team traveled in early January
(through a snow and ice storm) to the Ardsley Curling Club in New York to compete in the Olympic Qualifiers. Laurel (2nd), Courtney (lead) and me (vice) have been curling for a combined total of about 10 years. Our skip, Dee, was very experienced and that helped greatly. Although I think it's safe to assume that we were the least experienced team, we actually didn't play too badly and had the opportunity to advance to the Challenge Round in Green Bay. Given that three of us work and had already taken off one week of work, we decided to pass this time around. We'll see what 2014 holds for us!
My boyfriend, Roger, and I are also playing in the Cleveland Skating Club bon spiel this weekend. Our first game is at 8:30 a.m. on Friday. In between games and broomstacking, I'll have to try and squeeze in some runs so I can get my mileage up from the 40-50 miles per week range I've been stuck in.
Posted by Debra Horn at 11:03 AM