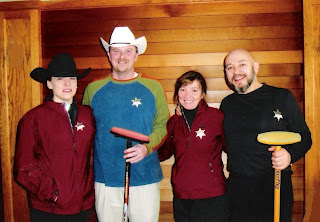 From the 28-team field, the Mayfield Curling Club managed to put winners in the 1st, 2nd, 3rd and 4th events at the Cleveland Skating Club bon spiel this past weekend. Our team, the Festersen rink - Else (skip), Bob (vice), me (2nd) and Roger (lead).
Our first game on Friday was a shakey start. We played a Canadian team from Annandale. Else got caught in traffic and arrived after the first end. We gave up 3 points that end. Ouch! Things improved and after 8 ends we managed a tie, sending the game into an extra end. We didn't have quite enough though and lost in the 9th, putting us in the 2nd event bracket. We breezed through our next matches against Columbus and Cleveland Skating Club teams. For our 4th game, we got matched up against another Annandale team. It was close but we prevailed in the 8th and advanced to the finals on Sunday. Our final comeptitor was a Canadian team from Hamilton. By Sunday, the ice was very slow since the Skating Club had no scraper or nipper and the pebbling was building up on the ice. We were able to capitalize on being more used to slower ice than the Canadians and won handily after 6 ends.
Since I had not been able to run on Friday and Saturday because I was curling, I managed to squeeze in a 15-miler before nightfall since it was a warm and sunny day.
Posted by Debra Horn at 11:03 AM