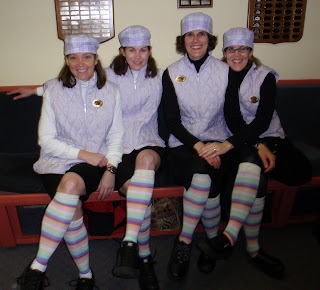 Me, Laurel, Karen & Courtney
Since our curling club has been closed for two weeks, we signed up for the Women's Last Chance bon spiel in St. Catharines, Ontario this past weekend. Between now and next November, there will be little curling going on so this was a good opportunity to stretch out our season.
Our first game was on Friday night at 9:00 p.m. On Friday afternoon, we hit torrential rain driving through Ohio, PA and NY. The border-crossing,however, took 1 minute and we were in St. Catharines in record time (about 3 1/2 hours). We had a pre-game drink at the hotel and then headed to the curling club (about 5 minutes away). The bon spiel theme was "Spring Fling" so we attempted to look the part in our matching hats, vests and socks. Our first draw was a St. Catharines team. We ended tied in the 8th end and so had to play an extra half end (each person only throwing one rock). We had the hammer and so had a huge advantage. Unfortunately, we blundered and lost by 1 point.
The next day was better. We played two different Welland, Ontario teams, winning both of them. We ended up winning the 2nd event. It was fun playing on "Canadian" ice. It is much faster and swings a lot more than our ice. It is fun to actually be able to draw behind rocks (hard to do with the straight ice we have at Mayfield). The bon spiel concluded with a dinner, lots of raffle prizes and too much Niagara wine! Afterwards, we retreated to the hotel, drank beers and watched the World Men's curling competition on TV (Canada vs. Japan).
We were rousted early on Sunday morning with the hotel's fire alarms blazing. False alarm but this got us all moving. It seemed like a good idea the night before to have a "Team run" in the morning. We actually followed through with it (Laurel and Courtney are not regular runners) and ran through downtown St. Catharines for about 40 minutes. We then hit the road and arrived back in Cleveland in time for me to get in a 2-hour run before dark.
Posted by Debra Horn at 10:06 AM