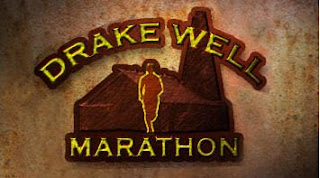 No one can control the weather and it was a warm and very humid day in Titusville, PA for the inaugural Drake Well marathon on Sunday, August 9th.  The day before was downright cool in Cleveland, but overnight with thunderstorms rolling in, the humidity index was in the 90s in PA for the 7:00 a.m. start of the marathon. 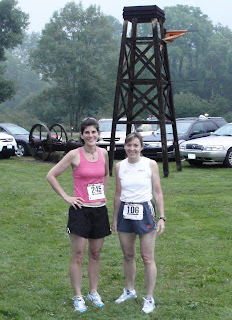 My friend, Karen, and I before the start of the Race.
As disclosed on the race website, the bulk of the elevation gain was over the first five miles of the course.  After the first half mile, we started running on a gravel/dirt road.  There, we encountered the first climb for the next mile of about 300 feet.  This was pretty steep, especially at the beginning of the race.  I decided to take it easy and walked!  After topping out, the road dropped dramatically for the next mile before another brutal climb over the next two miles.  The bulk of that elevation gain occurred over a half-mile with about 200 feet elevation gain, followed by a more gentle climb of another 150 feet over the next 1 1/2 miles.  I again opted for the wimpy route, walking the steeper part and trying to conserve energy for the bulk of the race.  Over the entire race, the elevation gain was about 1800 feet.
Once we finished running the "mountains," we turned off of the gravel road and did a  tour through the town of Titusville.  It looked like a very pretty town and it was nice to get in some sight-seeing.  After about mile 10, we hit the bike path, which is where the half-marathoners had started.  The bike path was heavily shaded and somewhat cool given the conditions.  We continued on the bike path to the 17 1/2 mile mark before turning around.  The path had a slight downhill to it going out which became tough on the return.

It was a small race, with about 120 marathoners.  I plodded along for most of the race.  The temps only hit about 75 degrees but the humidity was in the 90-plus range.  The trees were actually dripping with water it was so humid.  For parts of the bike path, it was kind of neat because it was foggy and very beautiful since we were running right next to the Oil Creek.  It though was kind of lonely as there were not too many runners that you encountered.

Despite my slow pace, I apparently overtook the 3rd place woman (a young 21-year-old) at the 23 mile marker.  I managed to hang on to that spot and came in as the 3rd place woman.  This was a bit of a surprise but for my slow 3:56 (!!) time, I got a certificate for a runningskirts.com skirt.  I'm mailing it in today so that's a pretty good prize (much better than a trophy!!)

After the race, unfortunately, there were no places open in Titusville for beers so my friends and I drove back to Erie for a celebratory drink before I headed home to Cleveland.

This was a well-organized inaugural race and has a lot of potential.  There are not too many August races in this area of the country so it's good to have this one as an option.  Even though the day was cloudy and we didn't need the shade, on a sunny day the bike path would definitely provide a cool cover for racers.
Posted by Debra Horn at 2:47 PM