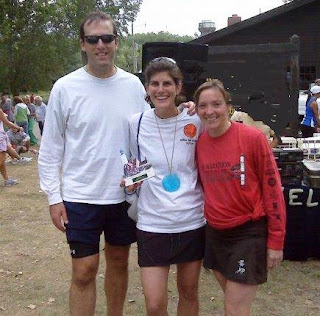 Ben, Karen (1st Place Masters in the Half-marathon) and me at the end of the Race
I'm in the home-stretch.  Only a few more weeks until the North Coast 24-hour race.  I needed one more long run before then and picked the Presque Isle Marathon in Erie, PA.  The race was last Sunday at 7:00 a.m.  I had run this race last year and then it was a hot and miserable experience.  I was hoping for a better effort this year.

Right before the race, the temperature was in the mid-50s.  I was trying to decide what to do - a hard effort or an easy pace?  Before I made up my mind, the gun sounded and we were OFF!  The half-marathoners started with the marathoners - the race was 2 loops around Presque Isle for the marathon, only 1 loop for the half.  The field was quite crowded in the first mile.  There were about 600 marathoners and 700 half-marathoners.  My first mile was about 8:30 pace.  That seemed ok.  But as I kept checking my mile splits, the next several were all under 8:00 minute pace.  I kept thinking I should slow down but I was feeling good.  At the half I was still hitting 8:00 minute pace and so thought I would see how long I could maintain that pace.

The couse is pretty flat and then weather continued to be fairly cool.  The sun only poked out sporadically, the race had water stops every mile (with HEED - YES!) and even a shower to run through around mile 25.  I slowly kept picking off women runners until there were only 3 women ahead of me....

In the last mile, I could not muster any more energy and came through the finish with a 3:30:10 and 4th place woman (1st place masters).  I was somewhat in shock over this time as it is a PR for me by 4 minutes, not just an age group PR but a PR for my entire running career.  My chip time put me at 3:29:50.

I am now in serious taper mode.  Since I've had good luck on Lake Erie, I'm hoping my luck holds out for the "other" Lake Erie race, the North Coast 24-hour.  Stay tuned.
Posted by Debra Horn at 12:16 PM