Well, it's official.  We brazenly signed up to compete at the 2010 U.S.A. Curling Nationals in Kalamazoo, Michigan next March.  Only ten women's teams signed up so we don't have to curl down for the privilege of playing at Nationals.  Instead, our team is automatically IN!  Apparently, the women's Olympic team, skipped by Debbie McCormack, is taking a pass at Nationals (the Olympics will be two weeks before Nationals). 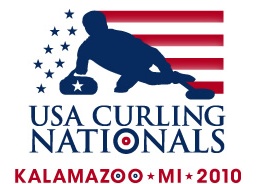