In keeping with my goal to run all Ohio marathons, I was compelled to sign up for the Inaugural Hall of Fame marathon in Canton this past weekend.  Now, you may remember that Canton did have an “Inaugural” marathon two years ago.  It was held in June and over a very hilly course.  For reasons not explained (at least publicly), that version of the Canton marathon was also the “last” one.

While a late April date could still potentially be warm, on race morning, helped by unseasonably cold weather, the temperatures were in the 30s.  I do not think it climbed out of the low 50s all day and was perfect running weather.  The 7 AM start was also a plus.


The route was also very favorable to runners. It was fairly flat, just enough ups and downs to keep things interesting.


My pre-race plan was to try to stick with the 3:45 pace group.  I haven’t been running a ton this winter and wasn’t sure I would be able to keep up.  The pace group was fairly large and it was nice to run behind a bunch of tall guys to break the wind (although not a lot of wind).   Water stops were spaced every mile and the miles really went by quickly.


The highlight of the race was around the 12-mile mark.  We turned the corner and the very enormous McKinley Monument was right in front of us.  I have to say it was quite impressive and I want to return to check it out along with the McKinley Presidential Library next to it.  Luckily, we did not have to run up the steps (108 of them)! 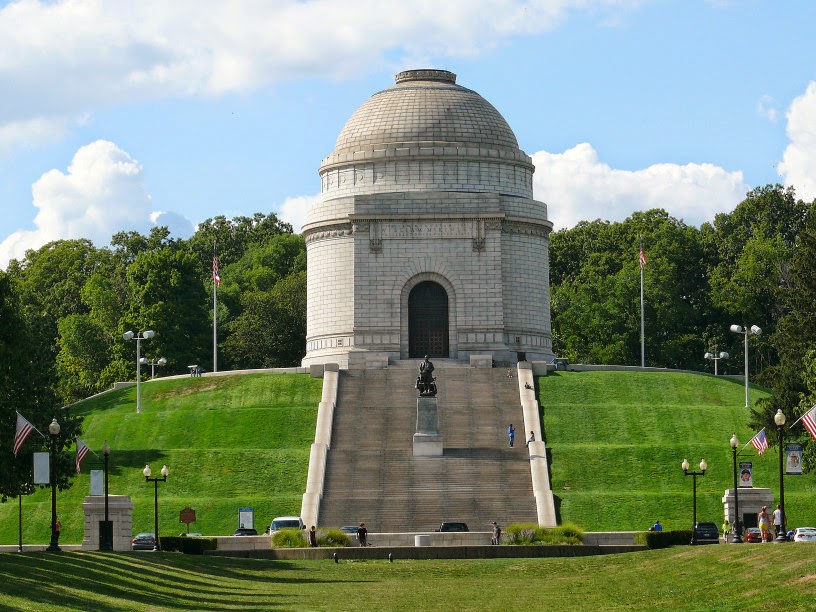 The race wound through many neighborhoods and quite a few spectators were out to cheer on the runners.  I kept with the pace group until about two miles to go.  Then I started to fade but managed a chip time of 3:45:57.  The race ended at the Hall of Fame football field so we had the opportunity to run where “champions” have run.  With a half marathon held in conjunction with the marathon, there was quite a crowd at the start but everything was well organized by corrals and the large numbers added to the excitement.  This is definitely a race to add to your spring race schedule for 2015.