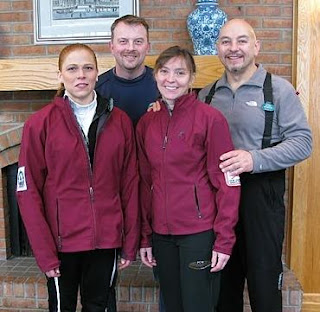 Else, Bob, me and Roger
We spent the past weekend at the Cleveland Skating Club curling in their mixed bon spiel. Our team returned with the same line-up as last year: Roger at lead, me playing second, Bob at vice and Else as skip. Last year we lost our first game, dropped to the 2nd event and then won the remainder of our games. This year, we would reverse that order. We won our first 4 games. For the last game, which was the championship game or First Event, we ended up tying after 8 ends. This was somewhat of a miracle as we had not been playing very well at all. We were down 3 with the hammer in the 8th end and got 3 points for the tie. In the 9th end, without the hammer, we were trying to force the opposing skip to draw. Else's final rock was a bit heavy and it ended up just floating by the other team's shot rock so that was the end of the game. An exciting game in any event. Our wins were against Roseland (Windsor), Skating Club (Cleveland) and two Annandale (Ontario) teams. Our only loss was to Ridgetown (Ontario).
Posted by Debra Horn at 2:37 PM